The Fathers and the Fire

Christian Universalism: The Morality of Gehenna

“The whole difficult of understanding Hell is that the thing to be understood is so nearly Nothing.  But ye’ll have had experiences…It begins with a grumbling mood, and yourself still distinct from it: perhaps criticising it.  And yourself, in a dark hour, may will that mood, embrace it.  Ye can repent and come out of it again.  But there may come a day when you can do that no longer.  Then there will be no you left to criticise the mood, nor even to enjoy it, but just the grumble itself going on forever like a machine.”

“Free will is a power inherently purposive, teleological, primordially oriented toward the good, and shaped by that transcendental appetite to the degree that a soul can recognize the good for what it is. No one can freely will the evil as evil; one can take the evil for the good, but that does not alter the prior transcendental orientation that wakens all desire. To see the good truly is to desire it insatiably”.


The doctrine of hell is not tolerable.  But it is consistent with morality and with a belief in the love and final victory of God.  Its presence in the Scriptures does not indicate an inconsistency there, but simply that reality and the depths of the human response to God are more varied and complex than philosophers might first imagine.
Posted by Fr. Lawrence at 9:24 AM No comments:

Christian Universalism: Will Everyone Finally Be Saved? 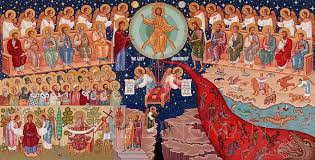 It remains to consider the question:  if a desire to rehabilitate a belief in the apokatastasis is indeed a fad, why does it arise in our culture now?  A full response cannot be attempted at the end of an already over-long article.  But I think that is not unrelated to our culture’s loss of its sense of sin.  As mentioned over a century ago by C.S. Lewis, the modern West has lost its sense of sin.  In ancient times, all men, be they Jew, pagan, or Christian, believed that they stood guilty before the divine judgment seat.  That is not to say that there was no cause for theodicy, but at very least one felt shame for one’s own sins.  Thus when Christ said in passing that men were evil [Greek poneros; Matthew 7:11], no one batted an eye, for everyone knew it was true.  We no longer believe that, and so (in Lewis’ famous phrase) we have put God in the dock, with ourselves as His judges.  In this frame of mind the very existence of hell is a stumbling block, and something which cries out for justification, if not revision.  There is a place for considering and explaining how the existence of hell is consistent with God’s love.  But we set ourselves up to err if we do not first feel the shame for our own sins, and proceed from there.
Next:  The Morality of Gehenna