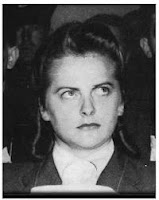 On December 13, the Orthodox churches rejoice in the life and glorious death of Herman of Alaska, the first saint of Alaska, canonized by the Orthodox Church in America in 1970, for that is the date of St. Herman’s repose and death.  It is also the date of the death of Irma Grese, pictured at left.

Irma Grese also died on December 13, in 1945, at the age of 21, the youngest person ever executed under British law in the 20th century.  She died by hanging after being found guilty of war crimes in 1945.  Irma, according to her court testimony, wanted to be a nurse, but was assigned to be a Senior Supervisor at Ravensbruck Concentration in 1942.  From there she was sent to Auschwitz, where she remained until January 1945, the second in command over 30,000 Jewish female prisoners.  Soon after she was sent to Bergen-Belsen Concentration Camp, where she worked as a Work Service Manager until her capture by the British on April 17, 1945.   Along with other SS personnel, she did not flee.  She was tried by the British for crimes against humanity.  As the Wikipedia article reports, “Grese was reported to have habitually worn heavy boots and carried a whip and a pistol. Witnesses testified that she used both physical and emotional methods to torture the camp’s inmates and enjoyed shooting prisoners in cold blood. They also claimed that she beat some women to death and whipped others using a plaited whip.”  Unlike other women executed at the same time, she remained defiant to the end.  Her camp nickname was the Beautiful Beast.  She was blond and young.  Her final languid word was “schnell”—“quickly”—asking the executioners to do their task with all speed.
Why mention Irma Grese, apart from the accidental coincidence with St. Herman of the date of her death?  Because she vividly illustrates the danger of not knowing Jesus.  She was only sweet sixteen when the Second World War began, and younger still when the Nazis came to power, but her spiritual seduction by the Nazis was not inevitable.   Other people lived through those terrible days, and did not succumb to the temptations of the times—people like Dietrich Bonhoeffer.  What separated the German Dietrich from the German Irma was knowledge of Jesus.  The Lord Jesus said to His disciples that, though they once belonged to the world, He had chosen them out of the world (Jn. 17:14), and they belonged to the world no longer.  And the world is a dangerous and deceiving place.  Whether or not the world around us raises high the Nazi swastika, or the Communist hammer and sickle, or any other idolatrous standard, is the luck of the draw.  Ultimately, the shape of the world’s standard does not matter.  What matters is that we have fled the world and are rooted in the Kingdom of God, and, as such, are immune to the lies and idolatries of the world.
Each generation has its own challenges to face, its own moral compromises to resist, and its own lies which God calls us to recognize and renounce.   In Irma Grese’s generation, the challenge was to recognize and resist the lies of National Socialism, but because she did not know Jesus, she was left at the mercy of her own frail, failing and impotent wisdom, which proved unequal to the task.  Accordingly she succumbed to the temptations of a virulent and violent nationalism, and was swept along by its lying emotionalism that engulfed most of her generation, culminating in catastrophe, both for her nation as a whole and for herself personally.  That was the challenge to be faced in her day and location.  In our generation in North America, the challenge comes from hedonistic consumerism, idolizing not Nation but Mammon.
This consumerism also tells its lies, asserting that, contrary to our Lord’s words in Lk. 12:15, a man’s true life does indeed consist in the abundance of his possessions.  Mammon proclaims that acquiring goods is the highest human endeavour and is the true path to happiness, and upon the altar of acquisition the wise man will sacrifice everything, including conscience, integrity, and compassion.  Those of Irma Grese’s generation lived under the sign of the swastika; we in North America live under the sign of the dollar.  Both signs are the standards and ensigns of idols, for neither Nation nor Mammon should be deified, and neither can save us.  Our Faith bids us worship only the true and living God, and to keep ourselves from the idols (1 Jn. 5:21) We fulfil this precept and renounce the idolatrous service to Mammon when we sell our possessions and give alms from them, thereby finding our true treasure in heaven (Lk. 12:33-34), when we use our riches to be rich in good deeds, being liberal and generous to those in need (1 Tim. 6:18).
We can only find this wisdom when we know Jesus, and when we attune our ears to His voice, and not to the lies of our generation.   Knowing Him allows us to measure all cultures by the yardstick of His divine wisdom, so that we can distinguish in our culture what is true from what is false.  The German Dietrich Bonhoeffer could distinguish truth from falsehood in his generation, as could the Russian Herman, missionary in far off Alaska.  Irma Grese could not.  The only real question worth answering on December 13 is this:  can we distinguish the truth from the lies?  Do we know Jesus?
Posted by Fr. Lawrence at 9:52 PM