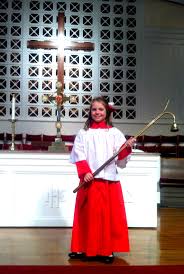 
The truth is that the very title “layman” in our culture has become synonymous with “outsider”, “untrained”.  If I say, “I am a layman in these matters”, this means that I don’t really know what I am talking about.  In fact a member of the laity is the insider, the initiate, a member of the holy laos and people of God, an exalted member of the royal priesthood.  Compared with this, who needs a title or a vestment or a special job?  We have equated the clerical state with power, and therefore have declared the laity to be those without power, gift, or ministry.  This is wrong, and in fact demonic.  Our first task must be the recovery of the dignity of the laity, and a recognition that each baptized Christian has a spiritual gift to be used in the building up of the local Church, in service to the Christian community—a gift which may or may not come with a title or a vestment.  Creating a new category of “altar girl” or finding things for them to do so that they will “feel special and valued” (as I have heard it phrased) is exactly the wrong thing to do.  For our value does not depend upon jobs that are special, but upon our common membership in the holy Body of Christ.
Posted by Fr. Lawrence at 4:54 PM