The Chapel of the Ascension: the Roof and the Ruins 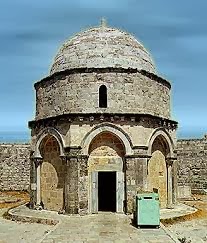 The worst thing was the roof; the best things were the ruins.  These were my thoughts as I stood at the chapel of the Ascension on the summit of the Mount of Olives.  This has been a site of Christian meeting for centuries, the place where they gathered to commemorate the Ascension of Christ into heaven.   Before this site was built, Christians gathered in the Eleona (Greek for “olive grove”), the Church built in the fourth century over the cave on the Mount of Olives where Christ sat with His four disciples Peter, James, John, and Andrew and spoke of the destruction of Jerusalem and the end of the world (see Mk. 13).  Of this spacious and splendid Eleona church built over the cave, only fragments remain, near the so-called “Church of the Pater Noster”.  But in the early fourth century, the Eleona flourished as the place where the Christians of Jerusalem met to commemorate the Ascension of Christ.  Later a place was built nearby, at the present “chapel of the Ascension”, and it was to this site that the pilgrim Egeria went later in the fourth century to commemorate the Ascension.  In her day it was not a church, but a mere circular colonnade at the summit of the Mount of Olives, a place to sit that was open to the sky.  She called it “the Imbomen”, from the Greek “en bouno”, “on the hillock”, and it was a fairly modest structure.  Later a member of the Imperial family enlarged the Imbomen so that was functioned as an actual church.  It was later destroyed by the Persians in the invasion of 614, and later still by the Muslims.


All that is left of that larger church now are the ruins, along with the original Imbomen structure, which stands about three meters by three meters.  In Egeria’s day in the fourth century, this structure was open to the sky, and one could stand in its center and look upward to heaven, and remember how Christ ascended to the Father.  The Muslims have bricked up the spaces between the columns of the Imbomen, and put up a roof overtop it.  They now charge a small fee for Christians to enter and look at its empty, unadorned interior.

The Not So Eastern Church 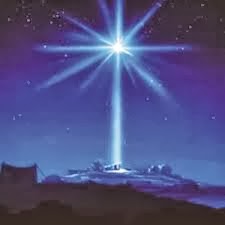 Regardless of the time of year one visits, it is always Christmas in Bethlehem.   For westerners like myself, approaching the little town of Bethlehem involves a return to one’s childhood, to Christmas carols and Nativity sets, to a lost time of wonder and innocence.  In my memory of Christmases past, it was always snowing in eternal Bethlehem.  One comes to Bethlehem now with the expectation of finding the tranquility of the stable seen on a thousand Christmas cards, with the three wise men parking their camels outside, and a star softly shining directly overhead.

Except that now the “little town of Bethlehem” does not enjoy a “deep and dreamless sleep” beneath “the silent stars”, nor does it “lie still” like the song says it does.   Rather it now lies within the troubled borders of the Palestinian Authority, and its embattled and besieged Christian population survives largely on tourism.  Its sleep is not dreamless; most of its Christian population dream of leaving the town and the armed Zionist state, and many already have.
Furthermore the stable portrayed on a thousand Christmas cards never was a stable as northern Europeans knew stables.  It was a cave.  Even as early as the mid-second century, the Church recorded the local tradition that Christ was born in a cave.  St. Justin Martyr writes in chapter 78 of his Dialogue with Trypho, “Joseph took up his quarters in a certain cave near the village, and while they were there Mary brought forth the Christ and placed Him in a manger.”  Origen, writing a little later in 248, says that
“In Bethlehem the cave is pointed out where He was born, and the manger in the cave where He was wrapped in swaddling clothes.  And the rumour is in those places, and among foreigners of the Faith, that indeed Jesus was born in this cave who is worshipped and reverenced by the Christians.”  St. Jerome knew of the cave’s location, and took up his own monastic abode right next to it.  Entrance to that abode can be found from within the present day church.
In the days of Mary and Joseph, Bethlehem was a tiny little hamlet, so small that the slaughter of its toddlers by Herod didn’t even show up in the history books.  (After all, history could focus upon much more important people slaughtered by Herod.)  And in those ancient days the area around Bethlehem was wooded, and contained a shrine of the pagan deity Tammuz.  Constantine soon changed all that.  Bethlehem was one of a number of sites he chose to adorn with large and splendid churches.  The church which Constantine built in Bethlehem was destroyed by the Samaritans in the sixth century, but later rebuilt by Justinian in 565, and it is this building which survives until today.  You can even see some of the original mosaic on the floor through a trap door.


To enter the Church of the Nativity (as it is now called), one has to enter through a small door.  In Justinian’s day the door was appropriately large and grand, but the Crusaders filled it in to reduce its size, and in Ottoman times it was reduced in size even further so that looters would not drive their carts through it.  It is sometimes called “the Door of Humility” because everyone must bow a little to enter.  No bad way to enter such a holy place.

Note:  I reprint here by request a post of mine which appeared first on "The Sounding" blog for Orthodox Christian Network in the summer of 2012.


That is why Gay Pride parades exist—to alter the perceived definition of normalcy.  The goal of those pushing for gay rights cannot be achieved with amendments and laws alone.  The sound and fury at the Springfield City Council is not the main arena for this struggle.  The true arena is the human heart, the inner attitudes and perceptions of the common citizen, and these are changed more slowly, through cultural infiltration with the new images and norms.  This amendment in Springfield has significance only because of its symbolism.  By passing the amendment, the City Council symbolically declares for the new and redefined normal.  By denying it, it opts to stay with the older and traditional view of what is normal sexuality.  Whether or not the amendment is passed I suspect will have precious little effect on actual hiring practices.  But then hiring practices are not the real issue.  The real issue—and the real reason the amendment should be resisted—is whether or not our culture should redefine sexual normalcy according to the new canons of the gay community.
Posted by Fr. Lawrence at 4:13 PM 1 comment: