Recently, on the first Sunday of Great Lent, we read the Synodikon in church.  Well, actually just a tiny snippet of it, the bit about the legitimacy of icons and that this faith had established the world, and offering a heartfelt “Memory Eternal” for those who had died defending it.  We did not read the entire Synodikon, because it is quite long and lists a lot of heresies unrelated to the icons we were holding in procession at the time, and it contained a lot very unfamiliar names of people who were being anathematized.  Reading the names would have felt to my flock rather like reading pages out of the phone book, and since both those being commended with “Memory Eternal!” as well as those being reproached with “Anathema!” were utter strangers to them, I just read the bit about the icons.  Those wanting to peruse the entire text may find it here.

Though I did not read the entire Synodikon liturgically that day, I am still glad that it exists and that we acknowledge its worth by at least reading some of it.  The point of the Synodikon is to draw very thick lines in the doctrinal sand and say that if anybody in the Church crosses those lines and strays into heresy, they must either recant or get out, and it is precisely this approach to truth that is necessary and saving.  It is also tremendously unpopular.  I remember recently reading a modern scholar who was quoting a line from one of the Fathers who was denouncing heretics.  The scholar put the word heretics in quotation marks—i.e. “heretics”—to stress that the term was the Father’s, and not hers.  She didn’t quite add the term “(sic)” after it to indicate how foolish she thought the term was, but she might as well have.  It was abundantly clear that she thought the term and the concept it represented to be archaic, harmful, and more than a little narrow-minded.  It certainly flew in the face of current canons of political correctness.
Those canons are based on a form of pluralism that says I’m theologically okay and you’re theologically okay, regardless of what you assert.  It says that there is not just a legitimate diversity of opinion (which of course there is), but also that the legitimate diversity is so broad that pretty much anything goes, at least in the towers of Academia in which our author was writing.  The idea of saying to anyone, either in those towers or out on the street, “Your opinion is heretical” strikes the average man as not only absurd, but in supremely bad taste.  They want to know if you’re in favour of reviving the Inquisition and burning witches.  You can’t use the h-word in civilized company any more than you could use other abusive labels.
Undergirding this attitude is the notion that heresy is just a simple mistake, akin to someone adding up a long column of figures and getting the sum wrong, or missing a question from the game “Jeopardy”.  Those enforcing the new canons of political correctness view the work of theologians with their precise definitions (such as we find in abundance in the Synodikon) as the work of people with altogether too much time on their hands who have produced formulas that have nothing to do with actual life.   Dogma, and the Church’s insistence upon correct dogma, they say, are irrelevant to Christian living.  It is not so.
Here I remember the observations of Dorothy Sayers, famous as the creator of the detective Lord Peter Wimsey.  In her address Creed or Chaos?, she presents the case of John and Jane Doe who are considering junking Christ’s ethical teaching as impossible and impractical.  “Because,” says John, “if he was God all the time, he must have known that his suffering and death and so on wouldn’t last, and he could have stopped them by a miracle if he had liked, so his pretending to be an ordinary man was nothing but playacting.”  Adds Jane Doe:  “It was easy enough for him to be good, but it’s not at all the same thing me for me.  How about all that temptation stuff?  Playacting again.  It doesn’t help me to live what you call a Christian life.”  Sayers points out that John and Jane have swallowed the heresy of Apollinarianism, which states that Christ had no soul like ours, but that the divine Logos took the place of a human soul in Him.  As it turns out, heresy has practical effects on living the Christian life.  That is why the theologians went to such lengths to refute it and declare it out of court for Christians.  It was not just a mania for unnecessary exactitude, but pastoral care for souls like John and Jane Doe.
So it is that we Orthodox need to retain the category of “heresy”, whether or not we read large chunks of the Synodikon.  The spirit which produced it is rare these pluralistic days where every man does what is right in his own eyes.  All the more reason to cling to that spirit when we find it.

Grasping at Straws in the Tower of Academia

A striking element indeed, and sufficiently striking, I submit, to jeopardize his inclusion in the list of ancient patristic worthies to which Ramelli would have him head the list. It looks as if acceptance or rejection of the doctrine of the apokatastasis functions for her as the canon within the canon for selecting who is a really worthwhile teacher. Perhaps that is why the doubtful Bardaisan is styled a “very learned Syrian Christian philosopher and theologian” while the earliest Apostolic Fathers are described merely as “The So-Called Apostolic Fathers”, since she admits that “In the group of writings stemming from the second century CE and collectively labelled ‘Apostolic Fathers’, the doctrine of apokatastasis as eschatological universal restoration appears to be missing.” I suggest that her praises of the “so-called apostolic fathers” would have been more fulsome had her favourite doctrine not appeared to have been missing.
Ultimately, it is not about the value or otherwise of single volume, even such a large door-stopper of a volume as The Christian Doctrine of Apokatastasis. It is rather about the value of Tradition for the huge rank of the file of the Church who will never earn a doctorate or attain to Ms. Ramelli’s considerable level of learning. The value of Tradition, as understood by the Orthodox, is that one does not have to be a scholar to know the truth. One does not require academic learning, wonderful as that is, but only humility. We believe that the truth has been given by Christ to His disciples and preserved in the Church, and that we access that truth by attending to the consensus of the Fathers. If anyone has the humility to bow one’s head to that Tradition, one can know the truth, even if one is an illiterate street sweeper incapable of reading or writing hefty tomes. Or, in the Lord’s own words, “I praise You, O Father, Lord of heaven and earth, that You have hidden these things from the wise and intelligent and revealed them to babes. Yes, Father, for thus it was well-pleasing in Your sight” (Luke 10:21).
Posted by Fr. Lawrence at 8:56 AM 1 comment:

Mr. Fudge and the New Reformation 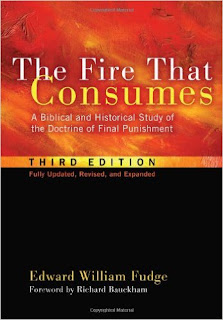