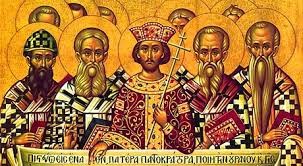 Those for whom ancient history is irrelevant and who equate “old” with “out-dated” (or better yet, “medieval” with “barbarically primitive”) will have trouble appreciating the Fathers of the First Council of Nicea, since they met and produced their work well over a thousand years ago, in 325 A.D.  How could a creed so old be remotely relevant today?  Accordingly, some churches have produced their own creeds (such as the United Church of Canada, which produced its own creed for alternative use in 1968.  It is a cautionary tale, for it began “Man is not alone; he lives in God’s world” and they soon enough found that political correctness demanded its alteration to “We are not alone; we live in God’s world”).  Among other things, the Fathers of Nicea declared the full divinity of Jesus of Nazareth by saying that He was homoousios with the Father—of the same essence as Him.  Later attempts to create consensus would suggest that maybe it could be said that Jesus was homoiousios with the Father—“of like essence”.  After all, it has been pointed out, it only involves the difference of one letter, and a tiny one at that.  Why fight over a single iota, a single “i”?  Who would care?  Why should any sensible person get worked up over whether the pre-incarnate Word was homoousios with the Father or homoiousios?  The ruckus of Nicea and afterward only went to prove how miserable and contentious those Christians were.
A moment’s thought however will reveal the nonsense of saying that Jesus was homoiousios with the Father.  He was of “like essence”?  What could that possibly mean?  That He was divine-ish?  God in an honourary kind of way?  Sort of God?  Almost God?  Anyone not obviously drunk and who thinks for a second will realize that the distance between God and His creation is infinite, so that one is either absolutely God or not God at all.  The eternal Creator, without beginning or limit, stands on one side of an ontological abyss, and all creation stands on the other side.  One can’t be a little bit God any more than one can be a little bit pregnant.  Like pregnancy, divinity is an all or nothing kind of thing—either one is completely divine or not divine at all.  Either Jesus was God and homoousios with the Father or He was created and of a completely different essence than the Father.  Even Arius, the villain of the Nicene piece, got that much.  But still one may ask:  why should we care?  Sure, we confess His divinity, but what does it really matter?
This is why it matters:  salvation consists in giving one’s life, heart, and soul to God, living and dying for Him down to one’s last breath and one’s last drop of blood.  The issue is:  may we give such loyalty, allegiance, love, and commitment to Jesus of Nazareth, or not?  If He is not truly God, then giving Him such allegiance would be idolatry.  No one sensibly would live and die so totally for a mere celebrity.  And if the Nicene Fathers were wrong and Jesus is simply just an ancient celebrity, we ought not to give Him our lives.  Our admiration, perhaps, but not lives and our worship.  But in fact the Fathers of Nicene were right, and Jesus of Nazareth is God in the flesh—Light of Light, true God of true God, begotten, not made, homoousios with the Father.  It is through Him that all things were made, and to Him that all things shall return with bowed knee.  It is our salvation that we bow the knee in love to Him even now before that final end, and confess that the road to His city runs through our heart.

Of the many shocking and revolutionary things the Lord said, perhaps nothing was more shocking and revolutionary than His words to the Samaritan woman at the well.  The conversation had become a little too close for her comfort (“you have had five husbands, and he whom you have now is not your husband”), and she was only too happy to change the topic to religion.  When she saw from Jesus’ words that He had prophetic knowledge, she broached the main subject separating Jews and Samaritans—the subject of worship.  The Jews inherited the religious tradition of David and Solomon, and worshipped in the rebuilt Temple in Jerusalem.  The Samaritans followed a rival tradition that rejected David and his kingdom’s subsequent history, and insisted that sacrifice could only be authentically offered to God from atop Mount Gerizim.  In response, Jesus said, “the hour is coming when neither on this mountain [of Gerizim] nor in Jerusalem will you worship the Father…God is spirit, and those who worship Him must worship in the Spirit and in the truth” (John 4:21f).     That is, a day was about to dawn when God was no longer interested in temples and sacrifices—in other words, in religion.  Religion would no longer be the way to worship God or draw near to Him.  That access would now be found in the Spirit (compare Ephesians 2:18).  Or, if the words “not interested in religion” seem a bit too extreme, perhaps one could quote the words of the author of the Epistle to the Hebrews:  religion (such as Judaism) had now become “obsolete” and “ready to vanish away” (Hebrews 8:13).
What is “religion”?  Religion is best defined as a system of practices whereby one seeks divine favour, something that by its performance binds one to the transcendent for blessing.  It has many components.  Religions commonly have sacrifices, which involve killing and burning the flesh of animals.  They have altars on which those animals are sacrificed, and personnel (priests) to do the sacrificing.  They have a list of foods which may not be eaten, but are considered to be unclean.  They assert that certain things make one ritually impure and ineligible to sacrifice, such as having a physical discharge or touching one who is impure.  Religions have certain days which are considered to be holy, and certain places which are considered holy, places where rituals and sacrifices are performed.  They have common rituals of feasting.  They assert that certain types of clothing must be worn when performing rituals.
Judaism was such a religion—it had its own calendar of holy days, its own times of feasting, its own holy place (Jerusalem) with a Temple and an altar there, served by its priests, who had to wear certain kinds of clothing when offering sacrifice.  It asserted that certain foods were unclean, and that certain things rendered one ritually impure.   In His words to the Samaritan woman, Christ claimed that God was about to sweep it all away, so that it would soon be obsolete and ready to vanish.  God was no longer interested in religion.  One wonders if she really could understand all that He meant.  It was certainly a lot for any ancient to take in.
Obviously Christianity is not a religion, though this was more obvious before Constantine than it is now.  This was the point of much of what Paul wrote, and why he was so upset when his Galatian converts considered accepting Jewish circumcision as if Christianity were a religion like any other.  For Paul Christianity was not a religion, but a new creation (Galatians 6:15).  Religion belonged the man’s infancy, and now in Christ man was finally coming of age.  Judaism was never meant to be the final goal of God’s working with His people.  Jewish religion was simply one step along the way to spiritual manhood, a maturity now available to all the world.  The end and goal of it all was not religion, but Christ (Romans 10:4).  In Christ we transcend this age and all its religions and its religious categories.  In Christ we participate in the powers of the age to come (Hebrews 6:5).  To vary the Pauline metaphor, for us to become religious would be like slipping back into infancy, and putting on diapers.  Diapers are fine for babies, but in Christ we have come to maturity.
It is easy for some to regard Christianity as a religion like the other religions of the world.  It is true that there are similarities.  Religions often have a holy text—the Hindus have the Upanishads, the Muslims have the Qur’an, the Jews have the Torah and we have the New Testament.  Religions have priests and functionaries set apart:  Muslims have imams, Jews have Rabbis and we have bishops and presbyters.  Religions use special buildings:  Muslims worship in mosques, Jews worship in synagogues, and Christians worship in churches.  With this and other similarities, how can one imagine that Christianity is not a religion?  By this understanding, Jesus is simply the Founder of yet another religion, the Christian one.
But in fact these outward similarities hide profounder differences.  Let’s take them one at a time.

Christianity then is not a religion, and Christ did not found yet another religion, but used the Jewish religion as the vehicle for His own saving work, fulfilling it and transcending it.  We still come to special buildings where clergy lead our prayers, dressed in special robes.  (We note in passing, however, that as late as St. John Chrysostom’s day, clergy did not wear special robes when leading worship.)  We take our part in offering the Eucharistic Sacrifice and receiving Holy Communion.  And we come to church on certain special days to remember and celebrate certain special events and special people.  But none of this means that Christianity is a religion.  Christianity is simply how Christ’s Body experiences here and now the saving realities of the age to come.  God is not interested in religion, and we shouldn’t be either.  Instead, we are interested in Christ.