I am, as those who know me well will attest, almost pathologically nostalgic, so that if someone created a 12-step programme to cure nostalgia, I would certainly count as a candidate.  Perhaps that is why I googled the name of Linda Meissner.   Meissner was a young farm girl from Iowa who dropped out of her Assemblies of God college in Missouri and eventually found her way out west to Seattle in the late ‘60s, where she became a part of the early Jesus People Movement there.  She gathered a group of intense young converts, calling them the Jesus People Army, and was instrumental in creating in the Seattle area the same sort of Jesus coffeehouse and communes that by then were beginning to dot southern California.  She was, in fact, riding the crest of a coming wave.  She worked with such Jesus People heavy-weights as Duane Pederson and Jack Sparks in that movement. 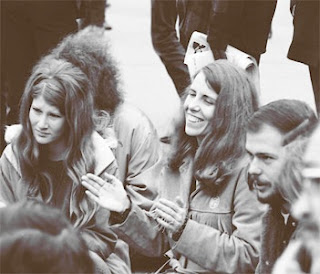 [Photo: In the center, Linda Meissner]

The Jesus People Movement, liked all movements, has moved, and exists now only in history books and yellowing newspaper clippings.  Duane Pederson and Jack Sparks also moved on.  But not so Linda Meissner.  When my nostalgic snooping on google caught up with her, I found her on You-tube, still thumping the same Jesus People drum.  In her “Official Presentation Video”, she tells us that “In  2011 I heard the word of the Lord saying, ‘Linda, you are to go once again…’ God has given me a great vision!  The Jesus People Army is not dead!  It’s just sleeping.  But Jesus says, ‘Arise! There will be a great army of youth going forth with the good news.’  I plan to raise up another Catacomb coffeehouse in the city of Seattle.  I’m expecting God to do great things!”  The point of the video, of course, and of her website, is to solicit help in pulling this off. 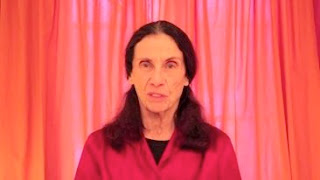 Linda’s current plan (read: delusion) is very saddening to see, though I suppose anyone who regularly googles out of nostalgia should expect it.  The success of the Jesus People was based, sociologically-speaking, on the convergence of the openness of the youth in the late ‘60s and the boldness of evangelical Christians in capitalizing upon it.  In those heady and psychedelic days, one could gather a crowd on a beach simply by playing the guitar and singing songs about Jesus, and one then preached to the crowd, Bible in hand, and many would come to accept the Lord.  Anyone trying to repeat the experiment today will attest that such openness from America’s youth has vanished, along with the novelty of long-haired young people talking boldly about asking Jesus into your heart.  The Jesus People succeeded at least in part because of its novelty, and novelty is by definition a fleeting thing.  The wonderful wave that was the Jesus Movement has long since returned to the sea.  Duane Pederson and Jack Sparks had the sense to realize this, and they continued to follow the Lord along other paths, eventually becoming priests in the Orthodox Church.


Linda’s lesson for us is that, as the proverb has it, one cannot step into the same stream twice.  The water in the stream moves on, and if one were to step into the stream again, it would be into a different stream.  Nostalgia is okay as an occasional pastime for aging clergy, but it is fatal if it becomes the foundation for a way of life.  Each day when we rise from our beds, we look into a new stream, for each day has new opportunities for service, new things to learn, and new people to meet who need God’s love.  The things we did and learned in the past were never meant to be the walls in which we live, but the foundation on which we continue to build.  Memory makes a great comforter, but a poor master.  It is good to share common memories with friends and family, and rejoice in what God has done.  We pour the wine and remember and drink to the grace of God.  But after the cup has been drained, it is time to move on.  New work will make for more memories, and we look ever forward.  This is an especially important lesson for those of us approaching what are euphemistically called “the golden years”.  We should never stop working for God, or accepting new assignments for the Kingdom.  We can, I suppose, write our memoirs, if we think anyone will be fool enough to read them.  But more important is what we write in our day-timers and desk-calendars.  Each day God gives us a new stream.  Let us step into it boldly and with joy.  Anyone who has been part of the Jesus People would understand.